Posted on September 3, 2012 by Teresa Boardman 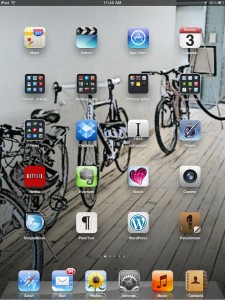 I never found open houses to be very administratively taxing but that doesn’t mean that we shouldn’t have more open house iPad apps to choose from.  The last time I did an open I suppose I should have “captured” the information of both people who showed up and digitally stalked them until I either made them cry or they bought a house from me.  A really great iPad app could help me with that. . . I think . . . .?

If open house guests signed in on my iPad they would be more likely to give me all of their information and would probably feel more comfortable being electronically stalked and would never dream of just walking out the door with my iPad.

If I did not have experience as an agent I might think that open houses are a huge and difficult part of an agents job and something worthy of throwing technology at.  After all we have to put signs out and sit or stand in a house for a couple of hours.  It is complicated and intense and such a small part of the job.  Yah maybe you are thinking if done right they are an enormous amount of work but you won’t sell me on that idea until you go out and do a few opens yourself.

iPads are handy to have at open houses  especially if no one shows up.   They can be used for watching movies, reading books or playing games but they really don’t multi task well enough to be used for all three at once.

Shortly after the iPad come out I made this presentation on the 12 best uses for an iPad at an open house:

My list probably would have been better if I had gone to Ipad school or maybe attended some free webinars or at the very least listened to the brilliant tech savvy people who want to teach us a better way.

I will predict that the next big thing in iPad apps for real estate agents will continue to be open house apps.  I particularly love reading advice about how agents should use their iPads on the job it takes about two seconds to figure out the writer doesn’t know much about using technology for business and has no concept of what an agent does all day.

This entry was posted in Bad Advice. Bookmark the permalink.